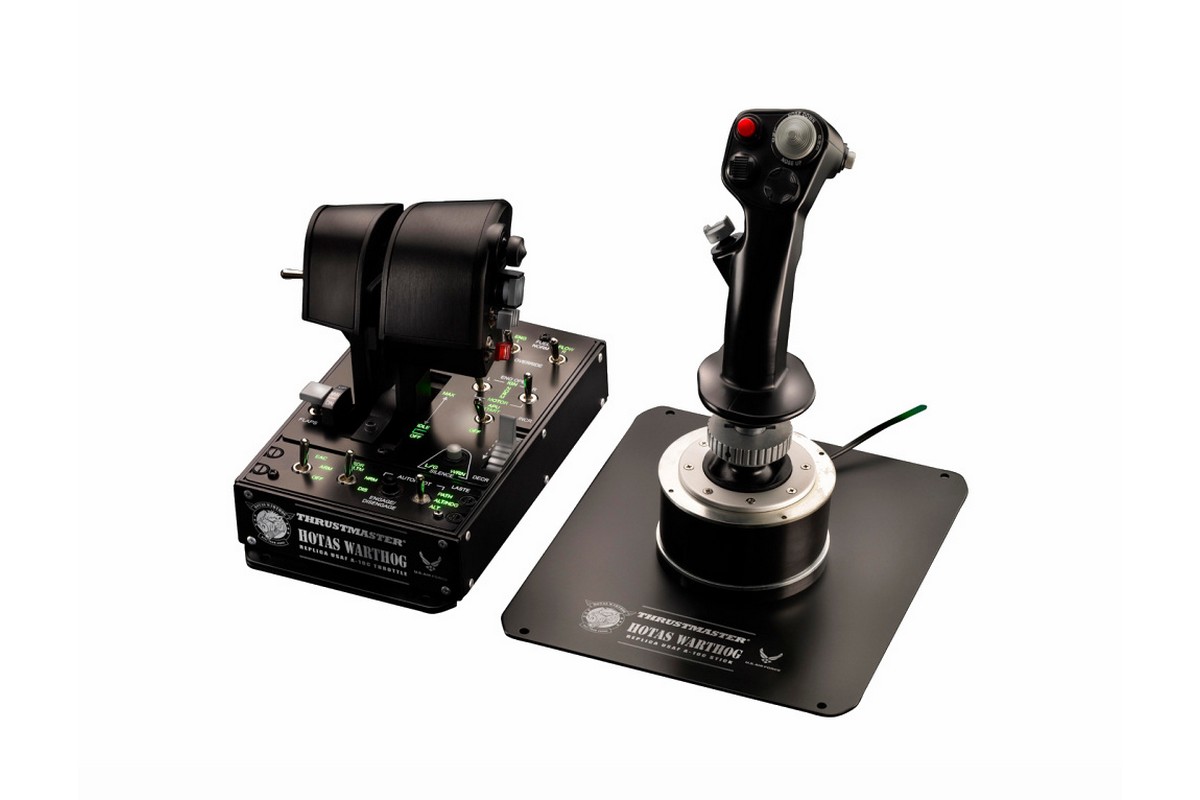 Weighing in at more than 14 lbs and using metal for the joystick, throttle handles, and bases, the HOTAS WARTHOG joystick is physically imposing. When you take into account the 55 fully programmable action buttons and 2 four-direction hat switches, each with a built-in push button (the first joystick in the world to incorporate such a feature), it becomes clear that the HOTAS WARTHOG is in a class of its own.

The throttle component has also been very carefully designed, with a dual throttle system allowing for independent control of 2 motors: a locking system lets the user either attaches the 2 throttles together, or else keeps them independent of one another. The magnetic sensor technology used for the throttles (14-bit resolution, with 16384 values on each throttle) provides unrivaled precision. Switching to the Idle and Afterburner detents is carried out via a Pull and Push system, for even greater realism. The Afterburner detent is disengageable, allowing users to perfectly adapt the throttle control to the type of airplane they are piloting. The throttles feature a total of 17 action buttons, a “Point Of View” hat and a “mouse hat / slew control”.

The product’s final mechanical component, the control panel, provides an extensive number and variety of controls. It includes a friction wheel, allowing users to manually adjust the resistance of the throttles according to their own taste. It also features backlighting for functions, which users will certainly appreciate for night flights; the 5 programmable LEDs are also a plus for use in dark or low-light conditions. The base includes a “trim wheel” and 15 action buttons, including numerous push buttons with resistance identical to that on a real airplane and industrial metal switches (2 or 3 positions) with highly realistic pressure.

The Most Precise and Feature-Filled Joystick You Can Get

The joystick features 19 action buttons, along with a “Point Of View” hat. It provides extreme precision, thanks to the H.E.A.R.T HallEffect AccuRate Technology magnetic sensor system it employs: 16-bit precision (65536 x 65536 values), with no gimbals (cardan joints). What’s more, pressing on the joystick’s buttons and triggers requires pressure identical to that required in an actual airplane – a true first in the world of joysticks. Particular attention has been paid to freedom of use for simmers, with the joystick’s handle being detachable, and its base being detachable as well (allowing you to install the joystick in a cockpit).